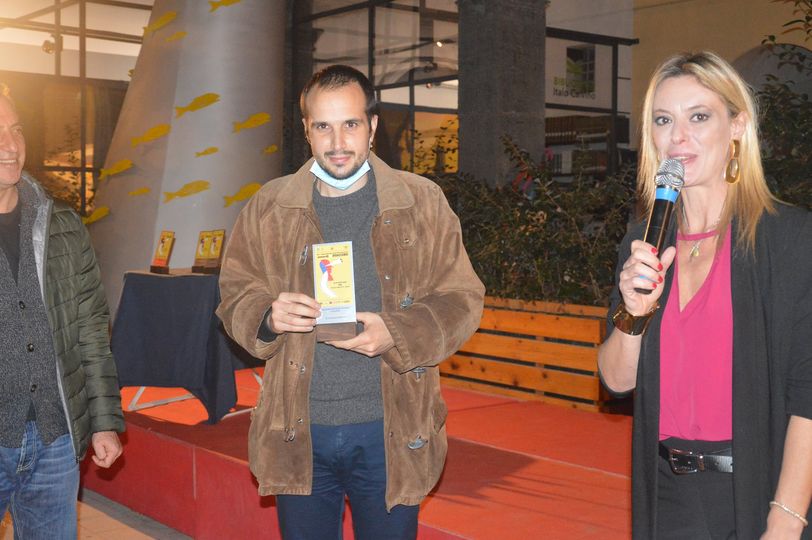 Francesco Romano with his short film “Tropicana” won the award of the national section of the eighteenth edition of accordi @ DISACCORDI – International Short Film Festival in Naples.

The artistic jury awarded the short film “because it manages to tell with a dry and precise style a family and social dynamic of unconscious inadequacies and voids. For identifying, first, and then directing, a cast of actors that are very credible and perfectly adherent to the narrative”.

The Neapolitan festival, directed by Pietro Pizzimento and Fabio Gargano, was held from 16 to 21 November 2021 in hybrid form: in presence at the PAN – Palazzo delle Arti Napoli and online on the international platform FESTHOME TV; The award ceremony conducted by Mariasilvia Malvone was held at the Court of Art of FOQUS in Naples with the projection of the winning short films. In jury this year as president the theater and television producer Angelo Curti supported by the jurors, the casting directors Adele Gallo and Massimiliano Pacifico.

The first prize of the Campania section goes to the short film “Le Mosche” by Edgardo Pistone, already awarded as best director at the International Film Critics’ Week in the framework of the Venice Film Festival last year: “sometimes a short film reveals a young man who already demonstrates all the qualities of a true author”.

Best actor of the 18th edition of accordi @ DISACCORDI for the jury was Giovanni Esposito for the short film “The Good Manners” by Valerio Vestoso with motivation “For the ability to interpret with great humanity the failure and the revenge of a small daily hero animated by a great passion/ obsession. For the authenticity with which he can immediately create empathy, involving the viewer until the last breath of the final monologue (radio commentary).”

David Bartlett with “Mousie” already awarded in many international festivals, won the award for best director, “For having directed with great mastery and skills a history of great depth and historical importance, a period that should never be forgotten. His direction manages to exalt all its elements: the screenplay and the magnificent performers, the detailed scenography, the photography of high workmanship and that well accompanies the mood of the short, the sound, the costumes, the hairstyles, and a montage that offers rhythm and suspense.”

The award for Best Actress of the 18th edition of accordi @ DISACCORDI goes to Milena Vukotic for the short film “With the Pawns in the Clouds” by Maurizio Rigatti: For giving dignity, gentleness and elegance to a woman who struggles for her autonomy in a world that seems to have destined her to the solitude and silence of the affections. For his gaze of poetic resistance that accompanies us throughout the narrative.

“O mà” by Vincent Launay-Franceschini wins the international section of accordi @ DISACCORDI 18th edition: A story full of humanity and passion, with three very intense and very well interpreted characters. In particular, the protagonist Marc Riso conveys to his character a great sense of anxiety and melancholy that the short film wisely cultivates with great balance and rhythm. The director shows great mastery of the film technique, creating a refined film for photography, set design, costumes and editing.

The German director Eric Esser with “The Angel of History” won the first prize of the documentary section: Because he skillfully intertwines history and chronicle, the frontier as a fracture front or possibility of hope, the choice between living or dying that in Portbou invested Walter Benjamin in flight from the Nazis as today invests migrants on the Balkan route, in the woods of Belarus, in the Mediterranean. In a continuous repetition of history under the eternal gaze of the Angel by Paul Klee.

Ivan Stur, Javier I. Luna Crook for the animation section and “The Land of Griffons” by Riccardo Soriano for the environmental section, also bring home major awards “Quma & the Beasts”.

It renews again this year the award for best editing, established last year by AMC – National Association of Film and Television Editing for the festival accordi @ DISACCORDI, with the jury composed by the president, Alessandro Giordani, accompanied by the jurors Cristina d’Eredità and Marco Monardo; to the editor Davide Vizzini for the short film “Bataclan” by Emanuele Aldrovandi goes the prize edition 2021. This year the Award for Best Photography is established in partnership with AIC – Italian Association of Authors of Cinematographic Photography , with the jury composed by the president Daniele Nannuzzi and jurors Simone Marra and Luca Cestari; Prize awarded in this first edition by Emilio Costa photography director of “Ninnaò” by Ernesto Censori.