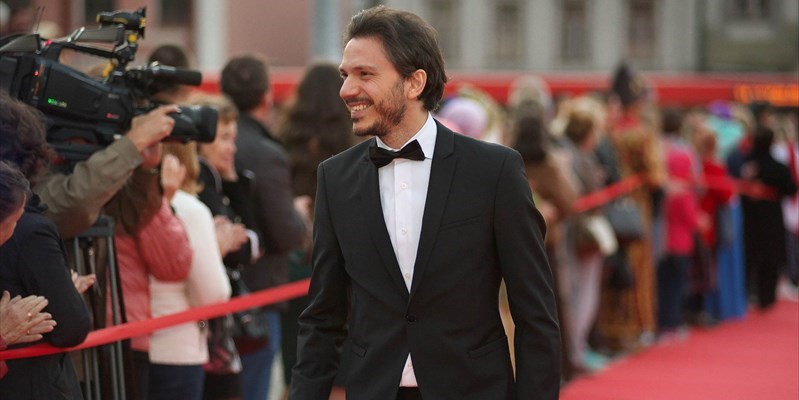 Giulio Mastromauro with his short film “Winter” won the two main awards, the one for the best short film and best direction, of the National Section of the seventeenth edition of accordi@DISACCORDI – International Short Film Festival in Naples.

“In a world where there is the need of truth, and then of feeling, memory, passion is all that we find in a moving way, especially passion, in this short film, “Winter”, with the fantastic support of all the performers, all bearers of “true”, to the smallest and most wonderful of these actors, Christian Petaroscia”. The jury awarded the short film for the skillful cinematic language, for its contents and for its refined direction. The film recounts the pain of Timo, the smallest of a Greek carnival community. The pain emerges in the enchanting interpretation of the little Christian Petaroscia, who with his silent and visceral gaze  is able to catapult the spectator into his “Winter”, the one of the soul. The film was also awarded the one thousand euro cash prize provided by FCRC – Film Commission Regione Campania. The Neapolitan festival, directed by Pietro Pizzimento and Fabio Gargano, was held in the hybrid form: online, on November 2020, on the international platform FESTHOME TV while the award ceremony was held in attendance on July 9, 2021 at the Court of Art of FOQUS in Naples, and ended with considerable public success and considerable appreciation from the insiders. In jury: as president, the editor Giogiò Franchini accompanied by the jurors, the actress Nastro d’Argento 2021, Teresa Saponangelo and the director Lamberto Lambertini.

The first prize of the Regione Campania Section of this edition went to the short film “Scannasurice” by Giuseppe Bucci, a piece taken from the homonym famous piece, written by Enzo Moscato and played by Imma Villa, “for the purity of the gaze in recounting the need to grow and find a place in the world by counting on the weight of the conditioning. The film’s production was awarded a film crane courtesy of the winner by ASCI, the Neapolitan film school. To the protagonist of “Scannasurice”, Imma Villa, went the award as best actress, “for the strength and self-denial with which he faces his characters, evoking the theatrical dimension, as a place from which everything starts and is formed”.

Best actor of the 17th edition of accordi@ DISACCORDI, for the jury was Pier Giorgio Bellocchio for the intriguing interpretation in “The portrait” of Francesco Della Ventura with the following motivation “Realism is the engine that turns it on, the angularity and the inscrutability of the human soul, reflections of a path, that lead to the creation of an always credible character”. The artistic director of the festival also thanked the “Fondazione Fare Cinema” chaired by Marco Bellocchio and directed by Paola Pedrazzini, for the kind collaboration offered at this edition.

The award for best editing, established by AMC – Association of Film and Television Editors for the festival accordi@ DISACCORDI, with the jury composed by the president, Giogiò Franchini and Osvaldo Bargero and Alessandro Giordani, went to Corrado Iuvara for the film “Gas station” by Olga Torrico, “the assembly in parallel between the dreamlike world and the reality of life, gives a decisive and fantastic support to the dynamics of the protagonist’s thought. The authorship of the dreamlike assemblage door to the final with lightness and a just time of closing. The editing as second writing of the film”.

For the section animated short films to win the first prize was the short film “La grande onda” by Francesco Tortorella, “for the evocative power of the graphic stroke and for the courage to represent in a fairy-tale tragic historical facts that have nothing to fairy-tale”.

“The school in the forest directed by Emanuela Zuccalà is a little jewel that has the merit of letting us know terrible stories in magnificent worlds far from us through the magnifying glass of the Cinema used in an expressive way as never before” Jury motivation for the best documentary of this edition of accordi@ DISACCORDI.

To win the first prize of the International Section was the short film, “Anna” by Dekel Berenson, multiple award-winning in the main international festivals, “for the ability to tell, in 16 minutes of images never banal, the hope and despair in a small city of eastern Ukraine devastated by war. From the incipit of the hanging meat quarters that Anna classifies and butchers, to the end in a suburban nightclub where Anna and other women, including her 16-year-old daughter, are exposed, classified and examined by American men in search of foreign wives, The film stages the shattered dreams and needs of two different and distant cultures. The director has the talent of a deep look and a delicate irony”.

The audience award, voted through the international platform Festhome Tv, was awarded ex aequo by “The portrait” by Francesco Della Ventura and “Nisciuno” directed by the Campanian director Alessandro Riccardi.

The 17th edition of accordi@ DISACCORDI – International Short Film Festival was organized by the Association Movies Event, with the main sponsor ASCI – School of Neapolitan Cinema,  with the partnership of Film Commission Regione Campania and AMC – Associazione Montaggio Cinematografico e Televisivo and in collaboration with the City of Naples – Assessorato alla Cultura e al Turismo, with the Centro Sperimentale di Cinematografia, with the National Short Film Centre, and with the support of the Campania Region.